The COVID-19 pandemic and its rolling lockdowns could have driven modern slavery further underground.

Despite the many challenges of managing global supply chains through our modern pandemic, attention is still focused on the problem of human trafficking and how to ensure modern slavery isn’t supporting the global goods pipeline. Citing a 2017 estimate by the International Labour Organization, the most recent data available, the Human Trafficking Institute says an estimated 20.1 million people are victims of forced labor; the McCain institute puts the number at 25 million.

As we noted two years ago, modern slavery doesn’t stop for a pandemic. In 2020, Australia was putting companies under the spotlight to ensure they were meeting the risk management framework and reporting obligations of the country’s Modern Slavery Act of 2018.

Measures to prevent modern slavery can encompass everything from company policy, such as a Supplier Code of Conduct that provides a basis for reviewing third-party vendors and suppliers and how they’re protecting their workforces from abuse, to establishing a whistleblowing program that enables employees to report suspicious behavior. And as Environmental, Social and Governance (ESG) initiatives shift from boardroom aspirations to measurable corporate objectives, and new modern slavery laws come into play, company leaders have additional incentives to ensure that ethical business practices with downstream partners and vendors are prioritized to reduce regulatory exposure.

A bill introduced in New York state on Jan. 7, 2022, could make New York the first state in the U.S. to ensure fashion brands are accountable for monitoring and reporting on their supply chains. The Fashion Sustainability and Social Accountability Act, or Fashion Act, backed by a coalition of nonprofits focused on fashion and sustainability including the New Standard Institute, the Natural Resources Defense Council and the New York City Environmental Justice Alliance, would require global apparel and footwear companies with more than $100 million in revenues with operations in New York to map a minimum of 50% of their supply chain, starting with farms where the raw materials originate through to factories and shipping. 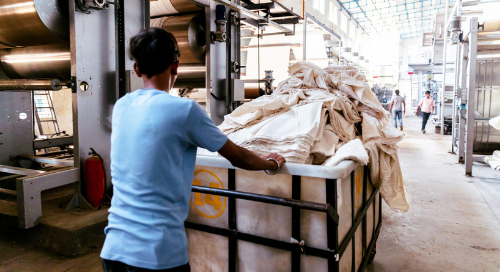 Companies would be required to disclose where in that chain they have the greatest social and environmental impact when it comes to fair wages, energy, greenhouse gas emissions, water and chemical management, and make concrete plans to reduce those numbers. Companies would be given 12 months to comply with the mapping directive, 18 months for their impact disclosures, and if they are found to be in violation of the law, they would be fined up to 2% of annual revenues.

The New York state bill follows on the heels of new U.S. law aimed at barring products made with forced labor in China, signed on December 23, 2021. While it’s against U.S. law to knowingly import goods made with slave labor, the Uyghur Forced Labor Prevention Act shifts the burden of proof from customs officials to companies. Firms will have to proactively prove that their factories, and those of all their suppliers, do not use slavery or coercion. The details will be in how the Biden administration enforces the new regulations and changes the business practices of companies that source products from China.

“I anticipate that there will be many companies — even entire industries — that will be taken by surprise when they realize that their supply chains can also be traced back to the Uyghur region,” Laura Murphy, a professor of human rights and contemporary slavery at Sheffield Hallam University in Britain, told the New York Times. 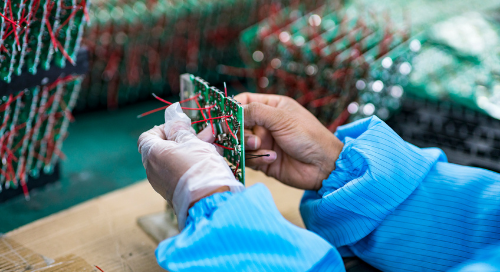 Australia is likewise adding teeth to its laws. “It’s that pervasive, almost every business has a risk of slavery in their supply chains,” Carolyn Kitto, the Sydney-based director of Be Slavery Free, a non-profit organization, told Bloomberg. A program launched in Australia is making it easier for activists like Kitto, along with governments and investors, to track the harsh, slave-like conditions that afflict some 40 million people around the world, the vast majority of them in Asia. Under Australia’s Modern Slavery Act, companies and investors generating more than A$100 million ($71 million) in revenue must detail how they’re managing the risk of slavery in their supply chains – and are required to upload their reports into a publicly accessible database.

The Australian program has successfully highlighted labor issues at global giants including Apple, Microsoft, and Unilever, along with changes they’ve made to address the problems. The following table compiled by Bloomberg details examples of modern slavery that the companies identified. 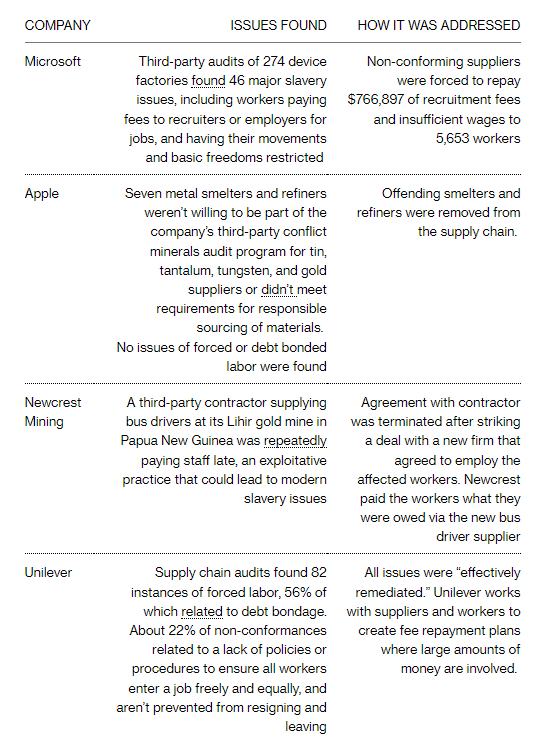 The Australian Council of Trade Unions and Human Rights Watch are calling for the addition of fines for poor disclosures when the Australian program is reviewed next year. Fines would be in line with Germany, which will penalize large corporations up to 2% of their revenue from 2023 if they fail to comply with a new law.

Advice on how to systematically root out modern slavery

China’s Xinjiang region has been the focus of allegations of forced labor and human rights abuses against the ethnic Uyghur minority, with reports from the Council on Foreign Relations towork by Sheffield Hallam University documenting the region’s abusive labor practices.

Forced labor, modern slavery and human trafficking, unfortunately, are in fact endemic issues in the global supply chain, human rights researchers at Stanford University said. A new collaboration among Stanford, Simon Fraser University, and Yale seeks to demonstrate how to systematically address human rights abuses that are built into supply chain structures. The Re:Structure Lab’s goal is to examine the ways in which global supply chains can be restructured. Most recently, the team published Blueprint, a guidance document showing how businesses and governments can promote fair, equitable labor standards and protect workers from the kinds of forced labor, exploitation and abuse that have been intertwined with global supply chain for centuries.

In HR Director’s Article of the Week (December 2021), Barry Stanton, an employment law expert with the Boyes Turner firm in the UK, wrote about modern slavery and what goes on behind closed doors. Having a robust risk assessment process to understand the areas at most risk of abuse in the supply chain is essential, he stated. “Not surprisingly, the pandemic has created more risks of modern slavery, particularly in high-demand sectors that have had to recruit quickly. The pressures in some areas may mean that recruiters and agencies have not followed stringent checks and processes.

“In light of this, when reviewing the supply chain, it is important to spot suppliers where there is a significant increase in recruitment of temporary labor and, in such cases, exercise extra due diligence. In all circumstances, if anything is found that is of concern, action must take place. The longer and more complicated a supply chain the greater the risk as margins come under greater pressure,” Stanton wrote.

Regular reviews of supply chain risk assessments are needed as businesses evolve to ensure vendors and suppliers are true to their word:

The TRIBE Freedom Foundation, in partnership with Nasdaq, has a goal of increasing awareness of modern slavery and promote financial literacy empowerment for survivors through a centralized portal, including content, practical tools and educational financial literacy material, tailored for financial institutions and survivor support organizations to support survivors.

KnowTheChain is a resource for businesses and investors to understand and address forced labor risks within their global supply chains. Benchmarking is used as a tool to identify and share best practices, and as a way to harness the competitive nature of markets to create a “race to the top” that encourages businesses to adopt standards and practices that protect worker’s well-being. See their benchmark reports.